Hints and Tips
Why not add 2.5ml (1/2tsp) of cornflour to each egg white when making meringues to give a marshmallow centre.

When grilling or frying meat and fish first coat with cornflour to seal in the flavour.

Use cornflour when stir frying to create thick glossy sauces. Mix cornflour with a little liquid and add to the stir fry ingredients.

To thicken soups, casseroles and stews use about 15g (1/2oz) cornflour to each 300ml (1/2pt) liquid. Blend cornflour with a little cold water, stir into the dish, and cook for a further 3 minutes.

Have lighter cakes and puddings by using 4 parts plain flour to 1 part cornflour.

To bake melt-in-the mouth pastry and biscuits use 2 parts plain flour to 1 part cornflour for a shorter texture.

For the smoothest homemade gravy blend 15g (1/2oz) cornflour with the fat from the roasting tin. Stir in 300ml (1/2pt) stock or water, bring to the boil whilst stirring. Boil for 1 minute, then season to taste.

Store in a cool dry place and in an airtight container once opened.

There are no reviews yet. 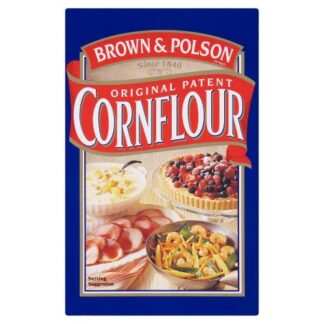